Twenty years ago, if you wanted to watch a TV show, you either had to watch it live, or wait until they did a rerun of the episode. And if it was a movie, you’d had to wait until it came out on VHS to actually watch it. Not to mention the headaches you’d get trying to rewind the VHS and the film inside it ended up out of the box, that was game over.

Nowadays, we can watch absolutely anything throughout the internet, and what a great feeling is that? You don’t have to wait a month for your favorite movie to come out when it’s already on the web even if it’s only been out for a month.

I’m a TV show addict and I really need my daily dose of a good TV show to keep my mind off of things.

Hulu is a premium streaming service that offers up some of the latest and greatest TV, movies and more. Just like Netflix, it has a monthly subscription from which you can choose what plan works better for you. 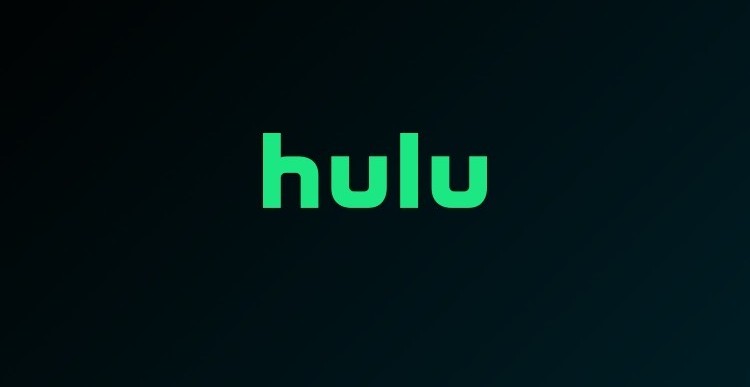 I discovered Hulu about three and a half years ago and it has been my best friend ever since. Now, you’re probably wondering “what can I watch on Hulu if I already have Netflix?”. Well, I am here to help you figure that out.

I am going to be discussing five of my top favorite TV shows to watch on Hulu. 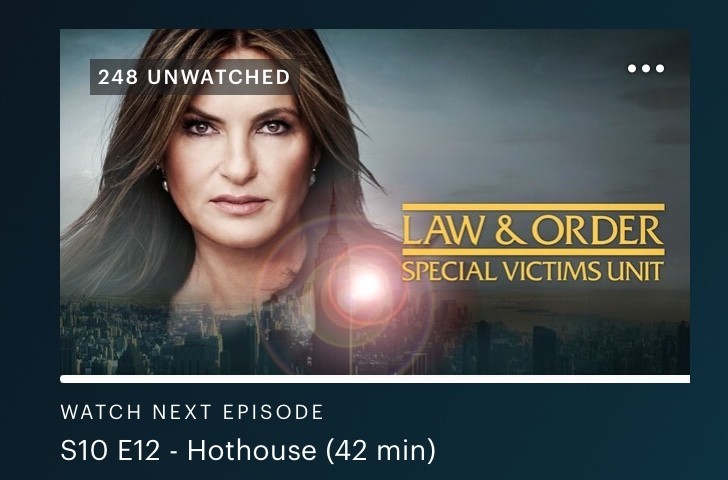 I don’t know about you guys, but SVU has been my absolute favorite TV show for the last five years! I came across it by mistake while I was surfing through the channels. I was immediately drawn into what was happening in the episode, and for some reason, I felt a deep connection with this show in a way that I have never felt before. After the episode ended, I waited until the credits appear because I wanted to see the actor’s names. After I had them written down I went overt to Google and did a whole research on them, because honestly, they were all amazing, especially the main actress that carries the character of Olivia Benson (the one on the image above).

Fun note: when I first started watching this show, she was a lieutenant and now she’s captain of the whole squad.

It has been an amazing, helpful and empowering experience to know that a show that has been on TV since 1999, still airs on Thursday’s at 10 pm. I still try to watch every new episode live, but when I can’t I immediately turn to Hulu. Hulu has all 21 seasons on its platform for you to enjoy any time you desire. After the episode airs on live TV they post the new episode on Hulu the next day, that way you don’t have to worry about missing any new episodes!

This show has truly helped me grow in such a way that I didn’t even knew it was possible. It did not only educate me on these topics that no one was talking about, but it also helped me grow as a woman, making me know that it is okay to set boundaries within every relationship that you have, either if it is with a partner, relative or a friend. It is okay to say no to things, and you shouldn’t feel guilty about it.

The show, in general, has an amazing message and it has helped survivors of sexual assault, child abuse, and domestic violence, start their process towards healing and claiming back their lives (me included).

*If that sort of things may trigger you or affect you in any way, please don’t watch it.

I could sit here all day and talk about this amazing series, but I’m sure you’re already tired of reading about just this one show so let’s go the to next one. 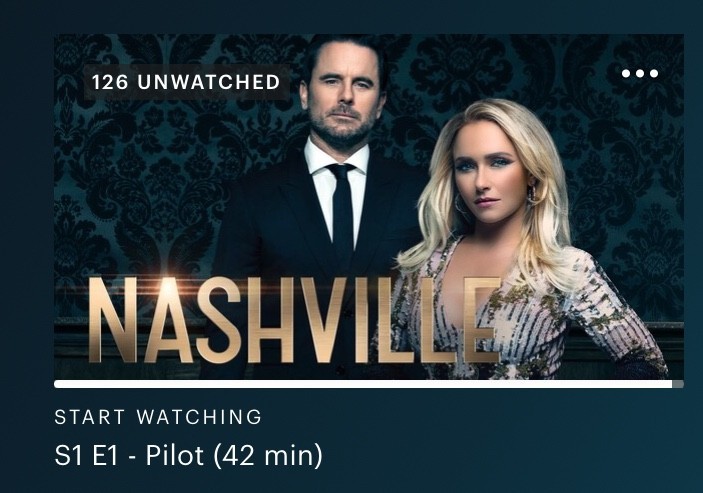 No, I am not talking about Tennessee. Although, it has a lot to do with the environment this historic city has.

Nashville tells the story of a successful middle-aged and country-singer woman who is struggling every day to keep her career on top, while also dealing with family drama, disappointments and competition. She finds herself caught up in a web of lies regarding her relationship with her husband and her feelings for her guitarist.

Every episode is full of unexpected drama and amazing vocals by the actors portraying these characters. You can find something for everyone and if you’re into drama and country music, then I strongly suggest you give this show a chance.

The show already ended in its sixth season and every season it’s on Hulu for you to enjoy and sing along. 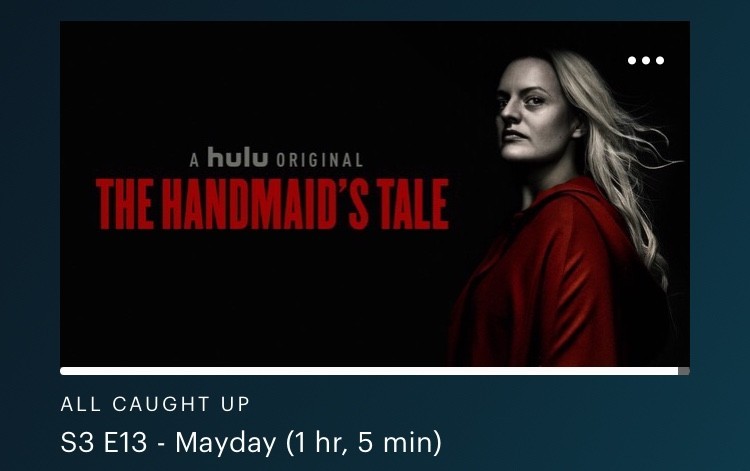 I have been using this streaming service for some time now and I always saw the ad for this show everywhere from the Hulu app to social media. Just by the name, it didn’t really caught my attention until a year ago when I decided to give it a try.

It wasn’t what I was expecting. I expected an old-story based show that revolved around maids and how they were treated in the places they worked, but no, I was facing a whole different take on this really disturbing storyline on how things would be if we lived in a parallel universe. Let’s not go too far, we’re already facing this situation in our everyday lives, it’s just not as extreme as the show portrays it.

The Handmaids Tale tells the story of how women lost all their rights to live a life that they wanted and desired. Everything was taken away from them, their children, husbands, wives, jobs…everything.

Religion is one of the main components in this series, and it narrates how beliefs based on what the Bible says, have been twisted into how women should live their lives. In the show, women only served to either do nothing, do housework or have children….by having children, I mean they were forced to have them.

*If that sort of things may trigger you or affect you in any way, please don’t watch it. 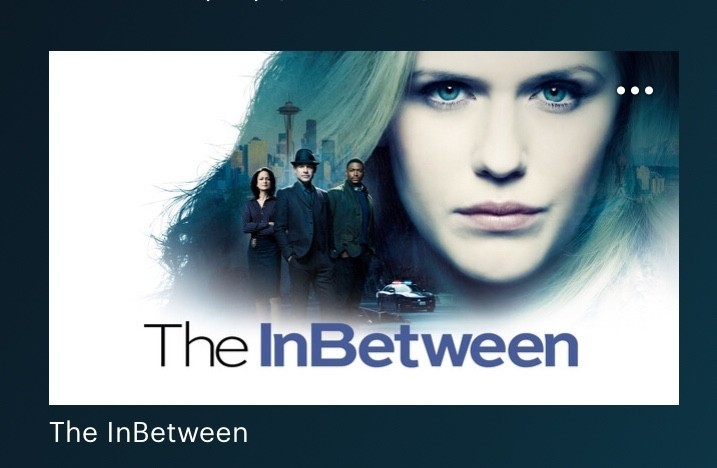 Now, this is a completely different show from the prior ones that I have discussed. It still has drama but it mostly leans towards the mystery and creepy side of the spectrum.

The InBetween is based on how a woman is trying to live a normal life while working and doing everyday things, but she’s stuck in the InBetween of two worlds: the good and the bad.

Trapped in a world where you have to live watching people who have passed away, be all around you it’s not a fun thing to do, but the characters main focus is to help these souls either get out of the InBetween they’re stuck in, or help others close that chapter of their life. 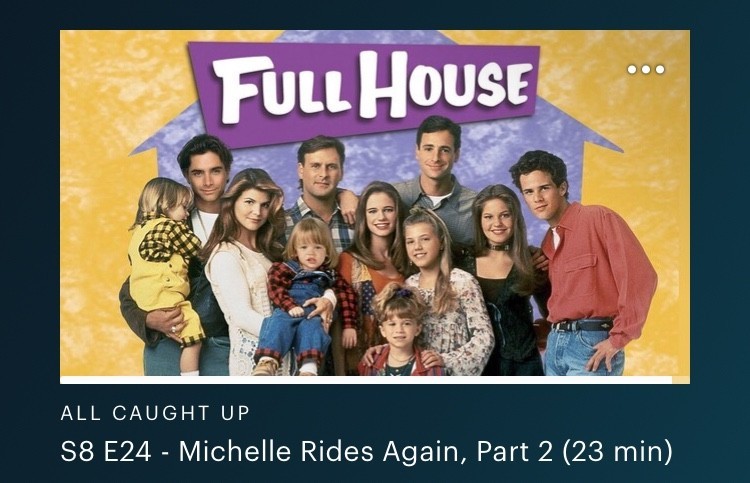 Yes, I am talking about the 1987 TV show! I don’t know about you, but I grew up watching this show and finding out that it was available to stream on Hulu was mind-blowing to me.

Maybe you’ve seen Fuller House on Netflix, but if you haven’t seen the original Full House you’re truly missing out on something.

Full House tells the story of how a single dad manages his time and experience, over raising three daughters on his own. Though, later on, one of his best friends and the brother of the woman with whom he was married, moved in the house to help him raise the girls.

It’s a fun show and something just to help you unwind from your everyday life.

I know that life can be complicated sometimes and some of us have duties to prioritize, but if you have some free time I really recommend you give these shows a chance.

Have you seen any of them, or are you planning to? If so, I would love to hear from you in the comment section down below.